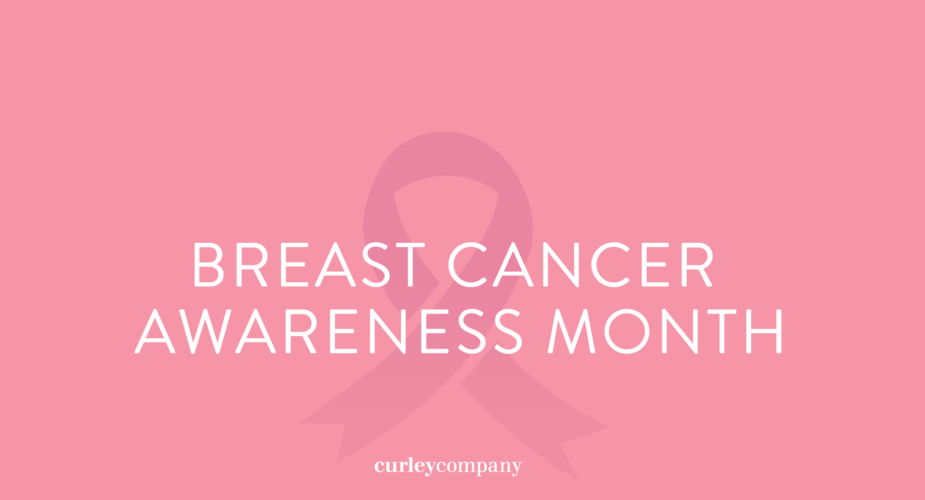 This month during a senior leadership meeting, we organically had a meaningful conversation about the importance of Breast Cancer Awareness Month, the impact the disease has had on each of us, and our desire to make an impact in the mission to end breast cancer. For nearly four decades, October has been recognized as National Breast Cancer Awareness Month – a time devoted to educating everyone about breast cancer, the importance of early detection, and access to timely, high-quality care.

The conversation we had as a leadership team struck a chord, so we continued the conversation with the entire Curley team. We shared how breast cancer has impacted us, how we personally honor Breast Cancer Awareness Month, and how we’d like to make an impact as a Curley team.

No matter who you are or where you live, breast cancer will impact your life. Whether you’re a caregiver, a friend, a loved one, a colleague or anything in between, we’ve all been touched by breast cancer.

Some of us know people who are survivors of breast cancer, but we cannot really understand what they’ve been through, even though we benefit from their wisdom and encouragement. One of my most inspiring mentors is Lisa Splitlog, a nonprofit communications strategist and a two-time breast cancer survivor. I remember Lisa’s second bout with breast cancer when we were working alongside each other and often thought, “I don’t know how she’s surviving, but I’m in awe.” A few years later it was my turn to battle cancer – I was diagnosed with advanced colon cancer on my 40th birthday, with no family history or shred of insight for what was next. By necessity, my curiosity about how Lisa was surviving cancer was answered. Lisa used her breast cancer experiences to write a book, “How to Survive Breast Cancer”, that she kindly sent to me. The wisdom she captured in those pages fueled my confidence and resilience to push through my own chemotherapy treatments. I am forever grateful to Lisa for her hope and encouragement.

Similarly, Greg Wilson, SVP and Director of Crisis Communications, recalls his grandmother, Janet Wilson, having a double mastectomy when he was in grade school in the 1970s. He still remembers his mother explaining how his grandmother would look different. Greg shared, “I remember asking if she was going to die. This was long before preventive mastectomies were known widely. My grandmother told me herself sometime later that it wasn’t a big deal and that it made her golf score better. She was always quick-witted, disarming, and competitive.”

In our shared experiences, we see how much life is still left to live after a breast cancer diagnosis and the importance of caregiving. Curley Account Supervisor, Lorianne Walker, shared her grandmother was diagnosed with breast cancer years before she was born, and the diagnosis didn’t define the rest of her life. “Growing up, what I remember the most about her journey with cancer is that I didn’t hear much about it. She was a dedicated caregiver for two of my uncles who had Duchenne Muscular Dystrophy, so their health and the well-being of the family always came first.” Lorianne continues, “I’m so grateful for her example of strength and selflessness and how she led our family.”

While mortality rates from breast cancer have decreased due to early detection and improvement in treatment, that progress is in jeopardy. During the COVID-19 pandemic, many people delayed their regular screening, and treatment and research advancements were disrupted. Early screening is important and saves lives, providing a collective total of nearly 100 years lived after breast cancer diagnoses by Curley Company loved ones. That’s partly what inspires our drive to make an impact in ending breast cancer.

Individually, our Curley team members honor their loved ones who inspire them during Breast Cancer Awareness Month and beyond. Jennifer Curley, President & CEO, has supported the Susan G. Komen Race for the Cure events in Washington, DC and NYC. “Several of my friends have lost their mothers to breast cancer and I have girlfriends who are survivors. Drawing attention to this issue is a shout-out to all of them!”

Greg Wilson thinks of his grandmother often, especially in October. He donates to the American Cancer Society annually in her honor. “Awareness month and the fall leaves remind me of my grandmother since we always spent Thanksgiving at her house. That’s when she told me about her surgery. Thankfully, after her mastectomies, she lived a long life—passing at 98 years old.”

As a team, Curley Company is raising funds and donating to the Susan G. Komen Foundation this month. Our team is participating in the 2021 Komen’s National MORE THAN PINK Walk on October 23rd. Together, we’re committed to making an impact in the fight against breast cancer and we welcome you to join along with us.